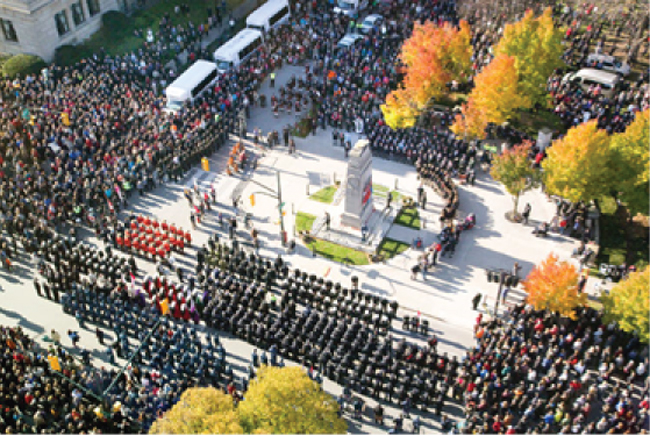 The 2021 London Remembrance Day Ceremony will be conducted at the London Cenotaph in Victoria Park on November 11, 2021 while working within the restrictions imposed by the current pandemic. Participation is by invitation only and spectators are discouraged from attending due to local restriction and the requirement to physically distance.

The importance of a live ceremony honouring our Veterans and their sacrifices is considered paramount, especially during the 100th anniversary Poppy as Canada’s symbol of Remembrance. As so many other commemorations have either been cancelled or delayed by the current pandemic, the symbology of paying homage to past sacrifices and before the eyes of those that served is more important now than ever.

The conduct of the London Remembrance Day Ceremony will follow the standard format, but will be modified to conform to the local restrictions as follows:

How can I show my support if I cannot attend this event?

There are a few different ways you can show your support during this year's Remembrance Day:

The planning of the National Remembrance Ceremony has taken into consideration the following restrictions imposed by the Regional and Provincial health authorities as a result of the current pandemic:

Official wreaths to be laid at the Remembrance Ceremony:

London area branches (Zone A6) of the Royal Canadian Legion, Churches and other places of worship, and other Veteran or community groups may also hold services. Given the pandemic restriction for the number of participants, these events may also be by invitation only. Please contact them directly for more information. At 10:55 a.m., Remembrance Day, Pipers of London Police Pipes and Drums shall be positioned at key Veteran cemeteries throughout the City. The Pipers shall play in unison prior to observing two minutes of silence at 11:00 a.m.

A Day of Remembrance

One day every year, we pay special homage to those who died in service to their country. We remember these brave men and women for their courage and their devotion to ideals. We wear poppies, attend ceremonies, and visit memorials. For one brief moment of our life, we remember why we must work for peace every day of the year.

This Remembrance Day, Londoners will gather at their Cenotaph. Click here to learn more the London Cenotaph. 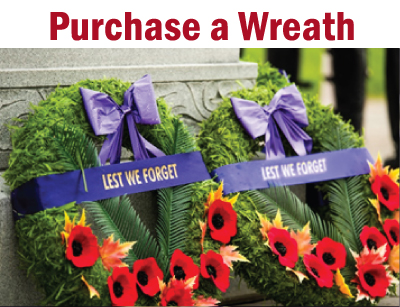 The Royal Canadian Legion makes wreaths available for purchase through Legion Branches for anyone wishing to place a wreath at a local commemorative event. Please contact your local Legion Branch directly to place an order. During the busy Remembrance period, we recommend you place your wreath order in early October.

Our members and volunteers focus on making the maximum positive effort for our military community and veterans. We honour those who sacrificed, providing essential services within our community. 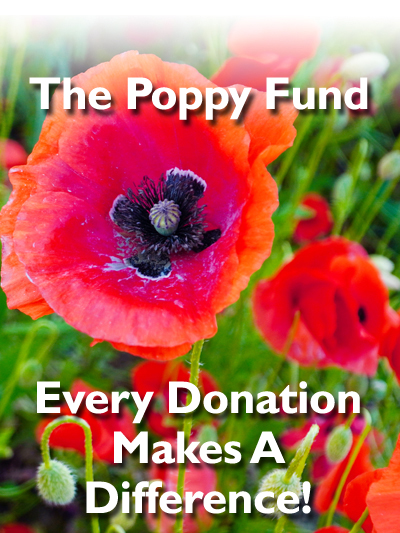